Finally I watched Gubra. The highly critisized indipendent film by award winning Yasmin Ahmad. No, I didn't watch it in the cinema. Didn't buy the vcd either. I watched it on my T5. How? That's beyond the scope of this entry.

I had wanted to wait for it to be air on tv. But then the girl in the film made a remark during a live telecast. She was critisized by people of all walks of life for that remark. For her remark, she might be banned from local tv. There goes my plan to watch it on tv.

Anyway, back to Gubra. Dialog wise, it does reflex how most Malaysian speak Malay/English in their daily live. It made the film feels real. In terms of story line, the film suffers what I call accute 'sembilu kasih' syndrome 'Sembilu kasih' is a local telenovela that has too many sub-plots in it. At least all characters in the telenovela is somehow connected. Whereas in Gubra, 'Bilal circle' did not crossed path with orked's. I felt like watching 2 film at once.

Other than that, I feel that Orked's character was not fully developed. For a person who had studied in England, you would expect a certain degree of maturity. Somehow I find younger Orked in Sepet is more matured than Gubra's Orked. Another thing that I couldn't comprehend was that how a married lady could touch the bare chest of a half naked (well ok, shirtless) man she just met, when she bumped in to the guy outside a public toilet in a hospital. Even if it was just to brush off a few strand of hair. Further more, her husband is in the same building. Just plain weird.

The "Bilal's circle" faired better in my book. It felt more real. The tender loving care showed by the wife to the husband. Man to animals. One neighbour to another. And don't forget, mother to child (even if the mother is a flesh trader). With little dialog, these circle of people managed to leave more mark on the film. Even though the T5 screen is small, I could almost see (and feel) all facial and body language used.

I really wonder how the lady playing Orked could won any award. She might deserve the award, but not from playing Orked in Gubra.
Posted by Me at 11:00 pm 2 comments:

Malaysia celebrated it’s 49th year of independence yesterday. How did you celebrate your independence day? Me, it started with on the 30th August. I had a meeting near KLCC area. The meeting ended around 11pm. 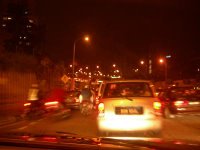 I though I wouldn’t get stuck in traffic jams. I was mistaken. I should have left my car at the car park and walked to KLCC park. They are holding some sort of celebration / concert. In my effort

to leave before the Merdeka-rush started, I got caught in massive jams. After a while, I decided to stop and park my car by the roadside (double parking another car). At least I got to chilled out and enjoyed the fire works. Here’s my (dis)advantage point:

The next day, I visited a few historical sites when Merdeka is concern. First was the Dataran Merdeka. It’s the field in front of Bangunan Sultan Abdul Samad. This was where the Union Jack was brought down and replaced by Jalur Gemilang. Where exactly this happened? There we many people at the field, mostly foreign

workers taking photographs. Not many would notice three ubiquitous small flag poles at the field. But those who took note would notice a plate at the base of the middle flag pole indicating those historical moment. 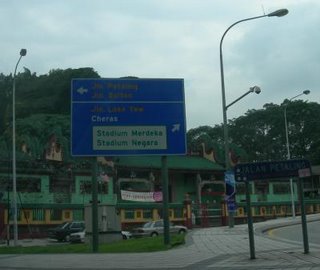 Next, was Stadium Merdeka. Where exactly this stadium? Somewhere near Petaling Street. This was where the Tunku Abdul Rahman shouted “Merdeka” on 31st August 1957. Today, it is almost forgotten. Except for some families patronizing the “Mamak” at the second floor, no body seems to bother about the significance of this old 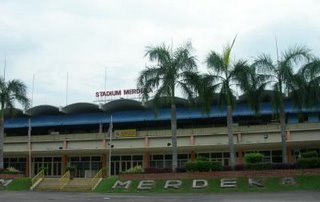 mark where Tunku Abdul Rahman stood 49 years ago, if there was, I didn’t find it. Other than building. There were no plate (like the flag pole) to me, there were a Japanese family taking photographs there. I’m not sure if they know that the stadium is actually a historical site.

Last was the National Museum. Actually I didn’t stop. I just drove passed it. In front of the Museum is a flagpole. The Jalur Gemilang here is different than the rest of Jalur Gemilang in Malaysia today. This particular Jalur Gemilang have less stripes (I think there’s 13 stripes). The stripes represent the number of states in Malaysia at its early days of independence.

Malaysia have come a long way since its independence day 49 years ago.

(p.s.: Recently I passed by National Museum again and noticed that the flagpole with the old version of Jalur Gemilang is not there. I must have mistaken the new flags with the 'historical' flag.)
Posted by Me at 1:35 pm No comments: