Thanking the lovely ladies at the museum's reception counter for watching over my lil' red, I continued on. The next stretch of sidewalk was under construction. Hence, I had to cycle on the main road which soon lead me to Kuala Lumpur City Gallery. 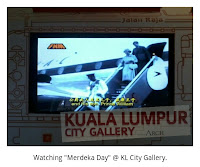 I've always seen the signage whenever I pass Dataran Merdeka. First thing that caught my eyes was the history section. They have photos of old Kuala Lumpur, from tattered huts to pre-independence brick buildings. I watched the original "Merdeka" reportage from FNM (I think it stand for Filem Negara Malaysia). 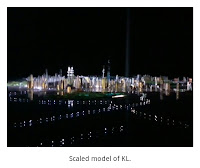 Tailing a bunch of Japanese tourists, I went upstairs into a dark room. In the middle of the room were models of some buildings and sky scraper. The models lit up beautifully in the dark room.

Other model that caught my eyes was the scaled model of the Sultan Abdul Samad Building. 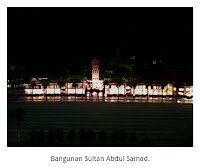 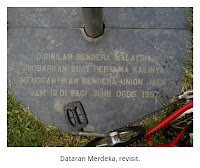 Naturally, after seeing the scaled version of the building, I had to go and see the real one. It was near by the KL City Gallery. In front of the building was Dataran Merdeka. There were thronged of tourists at the Dataran, taking photos of themselves using Bangunan Sultan Abdul Samad or Royal Selangor Club as their back drop. I revisited the spot that I stood about seven years ago. This time I had my lil' red with me. 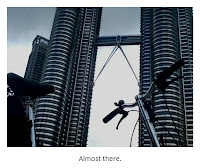 It was already noon. The cloudy day give the false impression of it was still morning. It was time to think about lunch. However, since I was still full from the heavy breakfast that I had, I continued paddling. On the side walk where ever possible, and on the main road when it was not.

I had wanted to have a picnic lunch. Knowing that KLCC Park is actually a private property, I doubted that the lil' red could go in. I parked and locked lil' red in one of the railing barricade. I continued on foot to the park. Instead of just a picnic lunch, I decided to try and see if I could get away with a cook out in KLCC park. Picked a bench and began unpacking my cooking kit.

Menu for the day was "Masak Lemak Cili Padi" (boneless chicken cooked in spicy coconut milk gravy). I didn't exactly cook the meal from scratch. It was a MRE (that's short for Meal-Ready-to-Eat) that I bought in TESCO a few days ago. The small alcohol stove performed well. Its small size, colourless and smokeless flame attract no attention.

I initially planned to dip some bread into the "Masak Lemak". Unfortunately I forgot to buy any bread. In my cooking kit was some angel hair pasta. Added a few strands into the gravy. A few minutes later, the masak lemak began to boil. 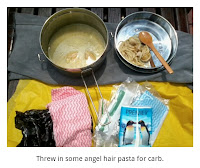 Once the flame was out, it was time to eat. I could just eat straight out of the pot, but I figured it looked better if I eat out of the stainless steel 'plate'. Plus I didn't think I could finish the small pot of "Masak Lemak".

Amazingly, I did! Time to clean everything up. Nothing sticked to the stainless steel pot and 'plate'. A quick rinse and wipe, everything was clean. I think the cooking kit could cook for two people. The lid could be used as the second plate. The only thing missing from the kit is cups.

Anyway, packed everything up. And got ready to leave. Dark clouds loomed. I had to make a move if I was to beat the rain. As I unlocked the lil' red, a man in office attire walked to me. He asked where I was from and told me nicely that bicycles are not allowed in the park - as I had guessed. Since he was nice and polite, I smiled and replied that I was just unlocking the lil' red. I was going to push it to the main road where I would be cycling. He smiled back and went on his way.

I didn't get far when it began to drizzle. Took out my poncho and put it on. Soon the drizzle turned into a downpour. I had to stop and took shelter at a bus stop.

Half an hour must have passed. The downpour showed no sign of stopping. I decided it was time to pack the lil' red and hailed a taxi. The taxi ride - the only thing I had to pay for the day - was RM 11.


The taxi ride was the end of the day's adventure. 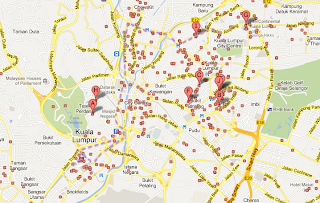 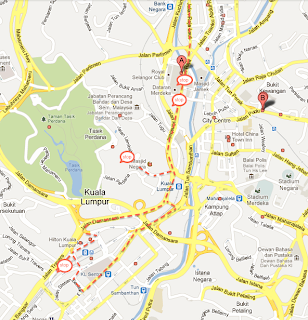 It was such a lovely day to be out. Cool and after-the-rain kind of weather. So instead of wasting the nice weather, I went cycling. Since it was a working day for most people, I decided to wear office attire. Just to see if it is possible to still be presentable in office attire after some paddling. So off I went.

Rode the lil' red as if I was a pedestrian, utilizing the crossings and broad sidewalk. Enjoyed the safety of the broad sidewalk (from fast moving vehicles) until it was blocked by cars.

Put on the safety vest and began to ride on the main road. Passed by numerous unsung heroes who make the city work. The road sweeper who gave way. The construction workers who smiled and stopped traffic so I could pass. Security guards who directed me to the right directions.

Reached some office buildings in KL Sentral. Parked lil' red and went into one of the buildings. Used their washroom to see if I was still presentable. I sweat, but just a bit, not as much as I had expected. I looked just as I would have looked if I had been walking from my car. I sat on a bench and before I knew it, my shirt was dried again. Time to get going again.

The route I took this time has better sidewalks. Most are properly paved. And the drains are covered. But the nice sidewalks have the tendency of coming to an abrupt end. I was forced to cycle on the main road. As cars and lorries zapped pass me, I made a mental note that I need to somehow attach a side mirror to the lil' red.

As if dodging fast moving vehicles were not enough, I soon faced with a huge puddle of water. The water took up the left most lane and the middle lane. Had to halt under the dark overhead bridge to figure out how to avoid the water and at the same time not get run over. Had to make a quick decision. 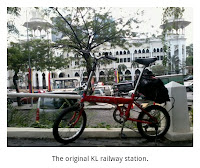 Even with my bright safety vest and blinking red rear light, I didn't felt safe to be stopping for so long under the overhead bridge. Once the road was clear, I sprinted across the road from the left to the right most lane. Then sprinted forward until I cleared the water puddle and sprinted back to the left side.  Before long, I found myself in front of KL railway station. 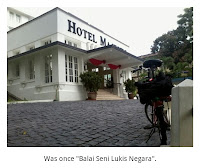 Opposite the railway station is a posh hotel. The building was previously the "Balai Seni Lukis Negara". I remember visiting the art gallery when I was young. It was somewhat a dark gloomy place for an art gallery. Now, the building has been given a fresh look befitting its new name, Hotel Majestic.

Next destination was suppose to be the Islamic Museum some where near the national mosque. I must have taken a wrong turn. After a steep climb (or rather pushing the lil'red) I still did not see any entrance to the museum. I had given up and was about to turn back at a parking lot when I spotted an obscure signboard at the gate. I didn't think there would be anything interesting, but since I was already there, I went in anyway. 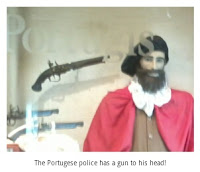 How wrong I was! There were police uniforms, equipment. weapons, and vehicles from different eras. They have replica of the police during Portuguese Era in Malacca. The guns on display, I am not sure if they are the originals or replicas.

I particularly like the photography equipment collection. Not only they have those old darkroom equipment, they also have a camera collection of various age and size.

They even have the spy cam that we see in the old James Bond films! 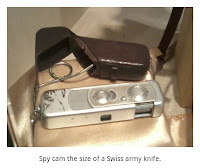