Though now is not exactly a rainy season, I had to cancel one of my plans the other day due to rain. I was afraid of the possibility of landslides happening along the route that I was suppose to use.

Lately I had been canceling a lot of plans to the extend that I'm beginning to give up in making them. I've almost always make plans according to these priorities: loved ones (family first, friends second); relatives; friends; and lastly, work. Unfortunately, work seems to take centre stage nowadays. Plans were canceled due to work related things (which included me being too tired after work).

For those who plans I canceled, I'm truly sorry. Let's make no plans anymore and be spontaneous!
Posted by Me at 12:13 pm No comments:

After a few sleep-deprived nights, I finally 'colapse' in exhaustion last night. I fell asleep right after having a light dinner. I was suppose to go out for meal with my brother and his family last night.

I must have been in a very deep sleep. However, a few days of waking up early have tuned my biological clock to wake up early, even when I have no intention of doing so. I woke up in the middle of the night, grope for my phone in the darkness, and glance at the screen. 3am. I also noticed the 'miss-call' icon as well as the 'sms' icon at one corner of the screen. They were from my brother.

Too late (or is it too early) to return the call, I tried hard to go back to sleep but failed. And so I occupy the time by reading e-mails, arranging schedule for next week, reading other people's blogs and finally , realized that I haven't updated mine with any meaningful enteries lately.

Since I took up my current job, I'm left with little time by myself to kill. Previously, I had bus/train rides to the office, stuck in traffic jams, and the numerous waitings (for meetings, for public transports etc.). 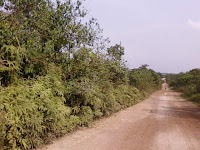 Nowadays, work seems to occupy most of my time. Public transports do not cover most of the routes that I take, so I have to drive most of the time. There's no KL-like-gridlock-traffic-jams for me to have time to blog in the car. When I'm not driving, my staff drives (yes, I have plenty of staff to boss/lead), hence the time while travellings or waitings are mostly use for work-related discussion with colleagues and staff.

By the time I reached home, my brain couldn't put thoughts into words anymore. So I either sleep early (like last night), or watch television till I fall asleep. I am glad that my so-called-office is not in the same district with my house. Otherwise, I might become a full-fledge workaholic! And now, since the sun will rise soon, let me peel myself off bed, take a shower and head to my brother's to have that promised meal.
Posted by Me at 6:07 am No comments:

Tired but couldn't sleep. Must have been the carbonated drink.
Posted by Me at 12:44 am No comments:

To sum up some of the things happened between the Indonesian trip and now:

Caught nasty chicken pox from my little nephew. Poxes covered my body and back. Fortunately the medicine was strong enough to knock me out. I spent two weeks recuperating at home. By the third week, work was piling up and I was back in the office even though a few of the poxes haven't fully 'dried'.

Catching up with work and trying to complete every thing before the next trip. In between work, we managed to plan for our trip.

Flew to New Zealand. Went for a self-drive road trip which included a boat ride to a volcanic island. Attended a friend's wedding. Upon returning to Malaysia, had a little sore throat and cough - symptoms of H1N1. Luckily I didn't have any fever. Nevertheless, the Health Ministry gave the order for a week of house quarentine. Cleared of the flue, I was back playing catching up with work.
Posted by Me at 10:30 pm No comments:

I had to look at the photos I took in Jakarta to jog my foggy memory. Here's a brief of the rest of the journey:

I can’t seem to remember what was served at the wedding. And I didn’t remember to take photos of the food served. So I have no clue to help with my memory. I do, however, remember that I couldn’t really eat the food because they were spicy – including the ‘somay’ (something like fishball served with spicy peanut sauce).

Since I was part of the ‘bride entourage’, I had to stay on until the day ended. We packed our things and were ready to call for a cab home (home in this case is Cibinong). The groom’s family asked us to wait. They wanted to drive us home.

And so we waited, and waited. By the time everyone was ready, we cramped into the awaiting Toyota Unser (or known as Kijang in Indonesia). Some how we managed to fit 10 people (Mutiara and her 7 family members, me, the driver and his co-pilot) into the car.

We arrived Cibinong around 10 p.m. Mutiara’s family invited the driver, and the co-pilot in for a drink. Bejo, the name they called the co-pilot, and Adhit, the driver stayed for awhile and chatted. I soon found out the Bejo is KH’s younger brother. I also found out that most of the groom’s family (including Adhit and Bejo) didn’t realize that I wasn’t exactly a family. They just thought I have a weird Indonesian accent.

We had wanted to spend the day out. The plans included a lunch at a restaurant. We were about to leave the house when Kakak called informing that they were coming over. And so we changed our plans. We rushed to the super market. What fascinated me was that there was a section of the supermarket selling live fish. The fish was caught, smoked and packed. We did a last minute shopping and return home.

By the time we reached home, Kakak, KH, his mother, Bejo and Adhit was already there. They were picking fruits from the trees around the house. While they were busy picking fruits, I helped Mutiara to prepare the food – smoked fish, roasted chicken, salad and rice. The simple food was delicious. We chatted. Before we knew it, it was already dark. It was time for KH’s mother, Bejo and Adhit to leave. Kakak and KH would spend the night in Cibinong.

It was Mutiara’s mom’s birthday. It was also my last day in Jakarta. Early that morning, Mutiara called her mom’s office informing that her mom won’t be going to work. Since my flight was late that evening, we planned to go for a lunch outside and go for some last minute shopping. So I packed my bags, and we all headed out to wait for the Angkut.

After hopping on and off some Angkut, we finally reached Bogor. We headed to Pizza Hut to celebrate Tante’s birthday. Mutiara then took me to a shop selling traditional Indonesian ‘junk food’. I bought plenty of it for people back home. We met the rest the family at the mall next to the shop. We found a digital photo shop. We decided to have some photos from my camera printed. The photo was ready just in time before I had to leave.

The whole family walked me to the bus station. I could sense tears welling up Mutiara’s eyes. After a hugs and quick goodbyes, I hopped on the bus. Not long after that, the bus made its way to the airport.

Not sure where to get down, I asked the bus conductor to help. I told the him that I wanted to get down at international terminal for Air Asia. The bus driver nodded. About an hour or so later, as the bus neared a building, I recognized a sculpture. I think it was the same sculpture I saw when I first arrived. I was about to go down when the bus conductor stopped me. We had a little argument. He told me to get down at the next terminal. If the driver didn’t interfere, the conductor might not have let me alighted the bus.

Later, after I’ve checked in and was waiting to board the fight, I realized that the bus conductor must have mistaken me as a fellow Indonesian trying to catch domestic flight out of Jakarta.

(p.s. By the time of this entry, Kakak is already a few months pregnant.)
Posted by Me at 8:58 pm No comments:

No, I'm not still in the land of Kiwis. I've been back for quite awhile. I haven't been able to find time to sit, collect my thoughts about the trips (including the previous trip to Indonesia) and put them into words.

My current job left me little free time in the office. The only "free" time left are while on the road and waiting. I couldn't blog on-the-go. My trusty T5 couldn't go online with my current phone.

Hopefully, this newly installed-software on Samseng i780 would put an end to this unfortunate perdicament.
Posted by Me at 1:47 pm No comments: