Micro-adventure: To the seaside

Recovering from a fever, I decided that I need some fresh air. A little thing by the name of 'work' put a little delay in my schedule. It was already 10.30 a.m. by the time I got to the bus terminal. 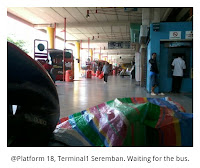 Twenty minutes later, the bus came. Boarded the bus with lil' red and paid RM 4.00 to the bus driver who is also the bus conductor. The bus departed around 11 a.m. 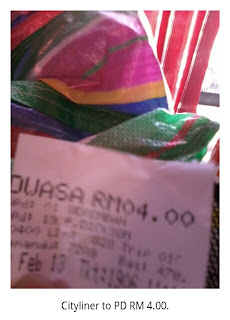 After stopping at what seemed to be every bus-stops, the bus finally reached the Port Dickson bus station one and a half hour later. 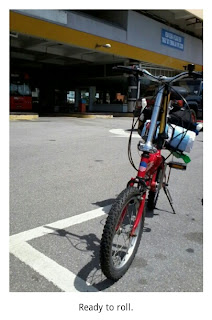 I had wanted to do some sight-seeing. The army museum some 5km away and the light house (some 15km away) look like interesting destinations. 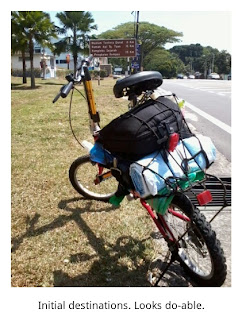 But after a total of almost an hour paddling up some slopes in the hot midday sun, I was ready for the shades. I could paddle further, but since I was still recovering from a bout of fever, to continue paddling seemed to be a foolish thing to do. 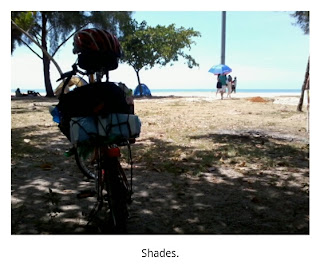 Saw a video on pitching up tarps. It seemed easy enough to try. So took out my newly-bought cheap tarp, and tried to put it up. Even with oddly placed grommets, hard ground that refuse the tent stake, I managed to get the tarp shelter up. Used my bag to weight down one corner in lieu of a tent stake. Lucky for me, I had a bungee (or elastic) chord to help with the tension. 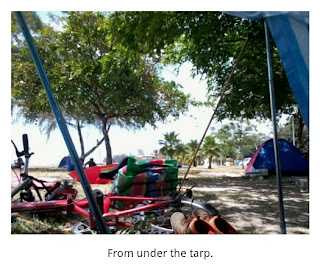 Lied down in the tarp shelter, took out a nifty gadget called tablet and played some games. The plan was to wait till the sun set a bit so that it is cooler to cycle. Soon my eyelids were heavy. Put the tablet away and dozed off for a while. But soon I was awaken by the chattering from a bunch of youngsters at a nearby picnic table.

Then I realized that I haven't had my lunch. Took out my cooking kit, and cook a few feet away from the shelter. 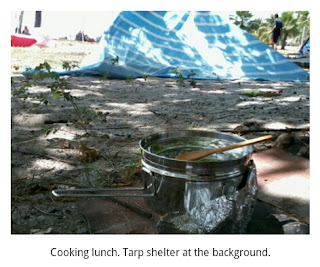 Menu for lunch was spaghetti with mushroom sauce - just a fancy way of saying I boiled some angel hair pasta then dump in a sachet of mushroom soup powder together with the pasta.

Ate and finished every thing. A quick rinse and wipe, the cooking kit was cleaned. This time I didn't eat too much to make it hard to resume paddling. Rested for a while before I broke camp, packed everything up and ready to leave. 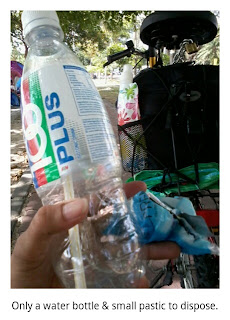 The day showed no sign of going to be any cooler. It was already too late to make the trip to the museum or light house and be back before dark. Turning back would probably be a better idea. 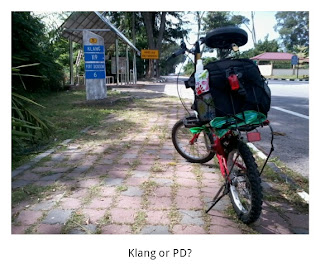 The ride back to the bus station seemed to be faster. Must be the fact that the ride back was mostly down hill. The bus conductor immediately recognized that I was riding a foldable bicycle. We chatted while I folded and packed lil' red. He told me that I should have come earlier in the morning and have more time to cycle. I agreed. He let me put lil' red in the luggage compartment - reminding me not to forget about it later. 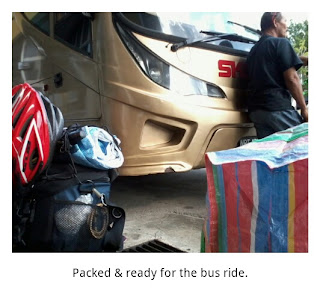 With lil' red safely tucked in the luggage compartment, I boarded the bus. The bus departed at 5p.m. 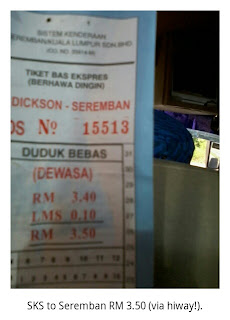 An hour later, I reached Terminal1 in Seremban. Did not get to do much sight-seeing but I did get some fresh air, and also get to try the tarp shelter. I might bikepack to Port Dickson again some time in the future.
Posted by Me at 2:06 am No comments: