There are some changes in my life. As mentioned in my previous post, I've already changed my main mode of transportation.

The power to be decided that some hikes (no I'm not referring to hike-up-the-mountain kind of hike) are long over due. Not only the KTM commuter fare, but also the parking fees, and highway tol - all at the same time. Then there were also reduction of subsidies to the petrol.

The petrol price now fluctuates every week, according to only God-knows-what. Officially, it was according to market price. But I don't know which market because some times when the world price was down, the local price still went up.

All in all, it was nolonger cost effective for me to continue commuting on the KTM commuter nor the bus. The thought of changing job did occur to me. But while looking for new job, I still had to commute. Then my brothers planted the idea of motorbiking to work.

I never would have thought that I would do a daily long distance commute on a motorbike. If it hadn't because of the hikes, I would still be commuting using the public transport and occassionally by car. So, one thing led to another.

Now, more than 56,000 km and almost two years later, I'm still on my bike. Not only commuting, but enjoying occasional solo rides.

I stared blankly at the computer screen, trying to get some ideas for this entry.

It has been quite a long while since I last write anything, apart from work related reports. I longed for my creative juice to flow. To have words flow through my fingers on to the keyboard.

Speaking of keyboard, earlier this month, I upgraded my tablet. The OTG adapter and the keyboard was working just fine. Until suddenly this morning the new tablet refused to detect the keyboard. Imagine my frustration of having to do tech support using only the small touchscreen keyboard on the tablet. You can't really do any serious ten-fingers-typing on the touchscreen.

So, off I went to a gadget shop to buy replacement OTG adapter. It only cost me RM 3. While testing the adapter and the keyboard at the counter, the good sales assistant looks on and enquired about my setup. I casually asked him if the shop have any small keyboard like what I was using. I told him that the tablet can't power up the normal-size keyboard. He said they don't have the mini keyboard, but...

He casually walked over one of the shelves, and reached out for a box. Out came a foldable bluetooth keyboard! 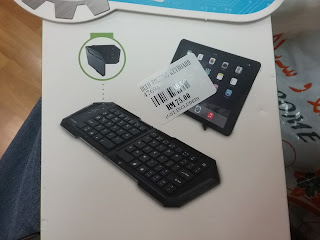 After testing the keyboard, I was sold! 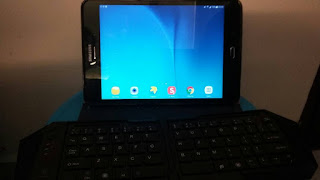 Now it seems to me, it is becoming a pattern to have August as the month for IT upgrades!
Posted by Me at 1:55 pm No comments: