For the past one year, I've changed job twice.

It first started when I noticed that I was sickly. I wasn't exactly ill, but I wasn't exactly well. It felt like I was in constant fever that refuse to go away. I felt just fine when ever I was out of the work premise. I had lost quite a lot of weight.

I initially wanted to take a break and recuperated. Opportunity came knocking in the form of a job offer from a smaller company. Granted, the pay was smaller, but compared to the workload, it was a handsome pay. I enjoyed my time at the company. I had plenty time for rest and family. I even had time to pick up new skill - leather craft.

Alas, it had to end. The probation was suppose to be only three months. But when neither boss nor HR mentioned anything about my confirmation, I started to look for another job after the fourth month. After working for only seven months (among the shortest stint so far), I move on to another job in a bigger company. I'm still adjusting to the new workplace and work environment.

Hopefully this change is for the best.
Posted by Me at 2:29 pm No comments:

I still enjoys photography. And I still love my mirrorless camera - Olympus Pen.

After spending thousands of kilometres and hours on the motorcycles, I realized that I some time couldn't stop in time to capture some of the fantastic view that I saw. Furthermore, after becoming the road statistic for Eid Fitri a couple of years back (yes I was hit by a car), an action cam was in order.

The relatively cheap action cam, have limited capability. But at the moment it is good enough to capture moments while riding the bike. The buttons on the camera have some what 'worn out'. Some times they don't respond when I pressed them. Nevertheless the action cam still could capture decent videos.

Beside the action cam, I recently purchase another camera: Olympus TG-5. I've always wanted a 'tough' camera. After so many years oogling it, I finally bought it. The image quality is better than the cheap action cam. But I'm not going to mount it on the helmet yet. Now that I have the TG-5, the Pen, besides not being water proof, suddenly seems too bulky to carry around. 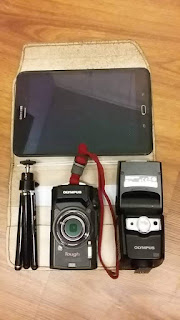 Dusting out the old keyboard

When I bought the keyboard, I had hoped that I would be posting more frequently in the blog. But that didn't really happened. Not because I had nothing to post about, but some how or rather I didn't get around to post anything.

Then when some characters on the keyboard stopped functioning, the keyboard got shelved away. I had been meaning to get a replacement, but never did. Today, out of curiousity, I took out the keyboard, and took it apart. Suddenly, the keys are all functioning again. For a RM 75 plastic keyboard, I amazed that it still could function!

Hopefully, I will be more motivated to update this blog in the future.
Posted by Me at 12:40 pm No comments: