While Kakak waited to begin a new chapter in her life, I went outside.

Unlike Malaysian wedding, where there would be tables and chairs at the dining area (in this case the tent area), there weren't any tables. The only tables

around was at the reception area - complete with 'receptionist'!. On the tables were guest books, and lo and behold, a collection jar. At the junction leading the to the house, was a decoration made of coconut leaves called "janur".

After waiting for a few minutes, the "juru nikah"

(the person who register the marriage) came. They brought the Kakak and KP out to the front porch. Everyone took their seat. The ceremony begun with all the neccassary paper work. It was read, signed and verified by the Kakak's father and a witness. Then the KP gave the Kakak the "mas kahwin" (dowry).

Before the solemnization, the microphone was given to the Kakak.

She read a very touching speech. She thanked her parents for their love, time, and money in raising her up. She asked the blessing and permission from her father to be married to the man she had chosen. The speech was so touching, that it drew tears from her mom.

They both read out the "akad" from the cue card. Once KP agreed to be married to Kakak, he was officially Kakak's hubby (and thus, from now onward KP will be known as KH). After a short 'doa' (prayer thanking God for the smooth solemnization), KH read out the "taklik". "Taklik" is sort of a pre-nuptial stating the conditions when Kakak entitle to ask for a divorce and when KH entitle to divorce her.

Once KH finished reading the "taklik" KH and

Kakak exchanged wedding ring. For the first time, Kakak shook KH hand as his wife. Then they both went around to shook hands (and hugged) their parents. It was during this time that the women folks in the house fussed over something.

They brought out a chicken dish. The newly weds were asked to pull the chicken apart. According to custom, the amount of chicked each side get represent the amount of give/take each will undertook in the marriage. Whoever get the chicken head represent who actually heads the family. Due to this, KH might have been very glad to find that he got the head!
Posted by Me at 5:02 pm No comments:

Though I dozed off almost immediately, I did not sleep well (as if that is some thing new). I am known to have sleeping problem every now and then. Further more, the ‘ambiance’ that night was not much of a help. Some one snored. Some one talked in their sleep. And some one’s baby cried most of the night. It was around 5am when I finally left the bed.

Thinking that there will be a long queue once everyone woke up, I headed straight to the bathroom. As I tiptoed pass people sleeping in the living room, I realized that there are too many people in the house. Perhaps more than what the small house could fit. It might have caused the temperature inside the house to become a little hot.

The cold water was a welcomed change. As I hadn’t iron my clothes, I changed back into the clothes I slept in. It was way too early to dressed up anyway. After the refreshing bath, I decided to catch some more sleep. I was glad that I did. I managed to get a short but very deep sleep.

Eventually everyone woke up, and the house was a buzzed. I got to know more of Mutiara's family - her dad, Nini and Teteh (I later found out that 'teteh' is an Indonesian dialect for 'elder sister'). Final preparation for the wedding ceremony was on the way.

But this time it was somewhat new to me. The amount of work she did, was outrageous. It was as if she was going to perform a plastic surgery. What with the razor blade, the measurement, and the markings! Then there were layers and layers of

powder (or was it called ‘foundation’? – I’m totally at lost when it comes to make-up jargons). Two hours later, she was still working on Kakak’s eyes. Growing bored and beginning to feel a bit stuffy, I went out to get some fresh air.

I tagged along Mutiara, M and D to a salon just a few metres away from the house. While the ladies were having their face done, I wandered around the area. There was a kind of a decoration to mark the wedding ceremony. In Malaysian Malay wedding, there would be a ‘bunga manggar’. I’m not sure what the decoration is called.

Then there were the tents in front of the house. Unlike so many Malaysian weddings, there were no tables under the tents, only chairs. I had noticed this when I arrived the previous night but I had thought they would take out the table today.

I was very much mistaken. The only tables that were taken out, were tables for two ‘reception’ areas. On the tables were a huge jar (or what ever you want to call it), and guest books. The tables were manned by four lovely ladies. An online acquaintance had mentioned that it is polite to bring an ‘ang-pau’ (some money sealed in an envelop) to be put into the jar. Unfortunately, I forgot about it.

I went into the house, and got dressed. By then (almost four hours after she started!) the make-up artist was almost done with Kakak. Kakak already had her face and hair done. She was already wearing a lovely off-white ‘kebaya’. On her hair was some fresh ‘melati’ (I think it is also known as jasmine). The smell of fresh ‘melati’ filled the room. And Kakak looked different.

And so she waited for her new day and new chapter in life to start.

(p.s. A little trivia: If you are a lady still waiting for your other-half, you should try to steal at least one little 'melati' off the bride's hair. It is believed that it would speed up your love affairs.)
Posted by Me at 11:01 pm No comments:

Imagine my surprise when I saw this: 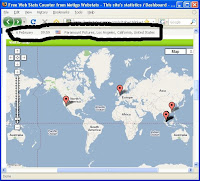 Hi people from Paramount Pictures.
If you ever return to this blog, do drop a line! Would love to get to know you.
Posted by Me at 8:39 pm No comments:

Journey into the night

No, I wasn’t about to return home. At least not my home (where ever that is). I was returning to Mutiara’s house

From the busy junction, with MP leading the way, we crossed the road, walked underneath an overhead bridge (which was actually the highway) to the other side of the highway. There we got on an ‘angkut’. The ‘angkut’ was quite full. Somehow we managed to fit in. Mutiara sat opposite me while MP sat next to me. Mutiara chatted. And unlike the previous visit, I could understand most of her chatters.

Along the way, some passengers got off. Leaving us with plenty of space. Before long we too got off and changed to another ‘angkut’. I recognized the ‘danau’ (a reservoir) that I had passed almost a year ago. I recognized a few buildings. Until finally Mutiara and MP yelled to the driver:

The ‘angkut’ stopped at the familiar junction in front of the gate to Mutiara’s house. We went through the gates. The same buildings greeted us. In the small wooded house was the same man I’ve met last year. He recognized me. We exchanged formalities before proceeding to Mutiara’s house.

Mutiara opened the door to her house. The living room remained the same. However, instead of showing me into the guest room, we went straight up to the upper floor. Everything was the same as my previous visit, except for one thing, they now have a computer corner, complete with a colour printer.

Mutiara introduced me to her cousin, D. From the living area, I could hear a lady singing in the bathroom. Mutiara told me that voice belongs to her younger sister, M. While waiting for them to get ready, I ate dinner. They also ‘fed’ me ‘pisang aroma’ (translated into fragrance banana). It’s actually fried banana wrapped in thin crispy pastry (similar to spring roll casing).

Hopping is the best word to describe what we did that night. No, we didn’t not go for club hopping.

The plan was to hop on a bus from Citeureup to UKI. From UKI, another bus to Bekasi, and finally, a taxi to the final destination, the groom’s house. And so we began our journey by hopping into ‘angkut’ back to the busy junction at the Citeureup. There we were, the five of us, waiting for the bus to UKI. Unfortunately, it was already late, and there’s no more bus to UKI.

MP decided that we need to hop on another ‘angkut’ to get to another place that would possibly still have bus. I lost track of the number of ‘angkut’ that we hopped on and off until we eventually got on a bus. I didn’t think we took the bus in UKI. Anyway, the five of us, finally got on a taxi and on our way to the groom’s house. It was almost 12am when we reached our destination for the night.

I had been on the road for almost twelve hours. I was tired and ready to turn the towel in. I dozed off almost immediately after my head landed on the pillow.
Posted by Me at 11:28 pm No comments: