When a company make a loss, it meant that the company is not making money. Mistakes that lead to the loss should be identified and learned from.

When a company lost money, it meant the money is unaccounted for. In other words, some one stole/swindled money from the company. Thieves should be caught and put into jails.

So which was it? Did a company make a loss, or did a company lost money, or was it both?
Posted by Me at 11:15 am No comments:

... that's a Malay word for deaf. It is also the title of a Malaysian that had won some international award recently. 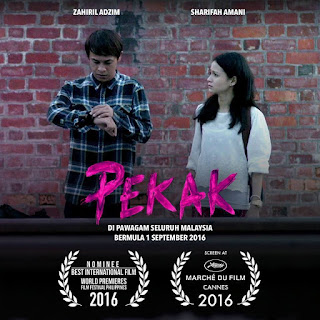 Looking at the poster, it easy to over simplify that the film is yet another love story. But it's not really a love story. At least not the typical Malaysian love stories that are full of unattainable fantacies. I can't seem to recall any where in the film where the two main characters (in the above poster) confest their love to each other. Don't expect of those corny I-love-you-you-love-me kind of dialogues and love scenes in this film.

This is a 'heavy' film. It deals with 'heavy' and serious subjects. But at the same time the film sucessfully blends in elements of comedy, suspence, thriller into one seamless flow.

"PEKAK" is the kind of films that the Malaysian film industry should produce more. Unfortunately, looking at the turn up at the cinema hall, I doubt the film would hit any box office.
Posted by Me at 11:33 pm No comments:

Last year I wrote about Hang Tuah and Hang Jebat.

The root of the conflicts was an unjust ruler. Hang Tuah, putting loyalty at the highest priority, did not go against his boss. Hang Jebat on the other hand saw justice is more important than anything else. What about the rest of the "Lima Bersaudara" (Brotherhood of Five?). I wonder what Hang Kasturi, Hang Lekir and Hang Lekiu had in their mind? Did they take sides? Did they take any actions?

If "Hang Tuah Lima Besaudara" is merely a myth, then the person who invented the myth is a visionary. Two opposing side fought, while the majority (isn't three 'Hang's is more than two?) was silent and perhaps torn apart.

This situation still rings true in many modern day conflicts!
Posted by Me at 4:00 pm No comments: