Since my previous entry, there were some changes in life. Among others, I've started working in a new job. I hope that I could again take a long break once the financial stuff are sorted out.

Anyway, it was the last Saturday for 2012. And it was my day off. I decided that I need a little adventure to spice up my life. Plus, I needed some work out. So, I packed a few things, and off I went on a bus. 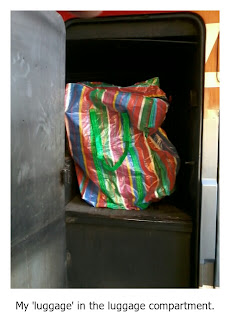 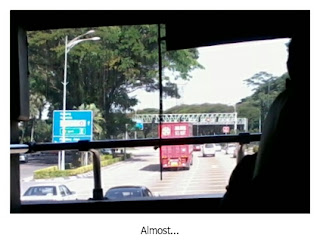 Less than an hour later, I reached Pasar Seni (also known as Central Market). This was in 'luggage', unpacked, unfolded, and ready to roll: 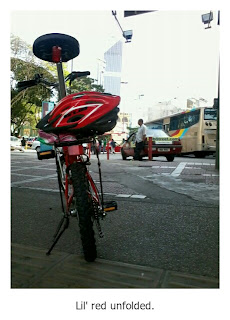 And rolled we did! 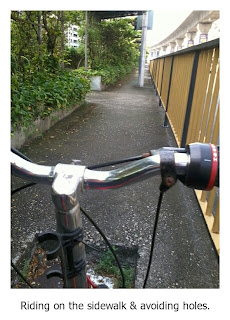 After a quick stop, I continued paddling. 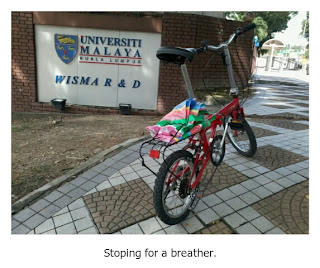 Made my way to Telawi, Bangsar. Stopped by a hardware shop to buy a chain and a padlock for the lil' red. The aroma from the nearby Restoren Mahbub was too much. Ordered a plate of Chicken Briyani. Before I knew it, I cleaned the plates.

I sat for a good 30 minutes after finishing my food, but I was still feeling a bit too full to continue paddling the bicycle. I stopped by RODALINK Bangsar to get my brake pad fixed. The guys there were suprised to hear my short accounts of the trip. They admitted that it was their first time seeing a foldable Le-Run. They were amazed to find out that the lil' red is more than 10 years old. I had wanted to do some upgrades to the lil' red: get a more comfortable handle bar and grips. I was a bit dissappointed when they told me that the newer handle bars and grips are too big for the lil' red's 'bracket'.

After a good chat with the friendly RODALINK guys (forgot to ask their names or take photos) I then headed to the Bangsar Village shopping mall. It was a pleasent suprise to see this guy. The music was great. It was so soothing, that I lost track of time. I don't know how long I sat there, listening him playing one song after another. 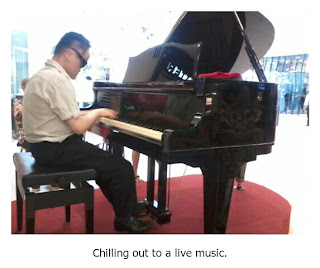 Got moving as soon as it was comfortable for the stomach to paddle again. From far, in the hot sun, I spotted a man paddling a bicycle with a side-cart. Didn't think I could catch up with him, but I did! 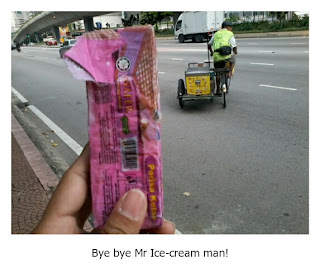 Sat on the lil' red by the roadside and wolfed down the ice-cream before it melted. It was simply refreshing!

Next stop: Masjid Negara. If you are a muslim, you can go in anytime. If you are a non-muslim, there are visiting hours for you (i.e. not allowed in during prayers time). 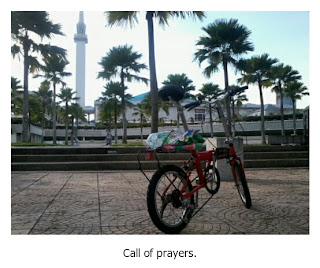 Whether you are a muslim or not, you'll have to cover your 'aurat' to enter Masjid Negara. For those who aren't so decently dressed, robes are provided for free. Parked lil' red and went in. The mosque even have a souvenir shop! 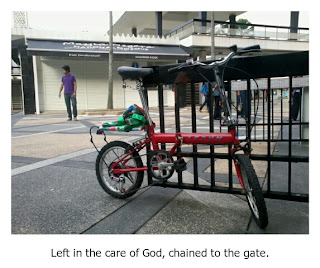 From Masjid Negara, I paddled to the nearby Taman Tasik Perdana to meet AD. Ate early dinner of laksa followed by 'pau kaya' as dessert. Then took a short stroll. Was too busy chatting with AD that I forgot to take photos. Before long, it was time to leave. AD agreed to give me a ride to Pasar Seni.

This time, the bus fellas didn't offer the luggage compartment to put my 'luggage'. They told me to haul it up to the seating area. Good thing the front seat was unoccupied and the bus wasn't full. Took the whole leg space of a seat for the lil' read, and sat on another seat next to it. The bus fellas didn't charge me extra. And so my lil' adventure came to an end. 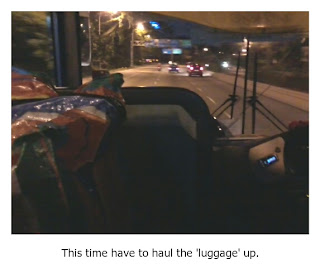