Yes, there is such place on earth. It’s not a Hollywood’s fictional place.

After a little rest, Aunt drove us - Ma Hen, AD, D and me - around town. Our first stop: Dress-Smart. Dress-Smart looks like any other shopping complexes. Main items sold are clothes of every type – work, play, casual, formal, cheap, and expensive. Not a shopaholic by nature (except when it comes to gadgets but that is for other entry), I was at ‘lost’. I ended up seating on a wooden bench opposite an ice-cream shop, eating an ice cream cone, while at the same time, eye-balling passer-bys.

First thing that caught my eyes were the fashion senses and the postures of the general public. While the Italians were impeccably (and formally) dressed, walked with their back straight and chin up (you get what I meant?), even when walking through street bazaars, the New Zealanders that passed by me that day were opposite the Italians. Most were casually dress, preferring t-shirts and jeans. Some were wearing working boots and some were only in their sandals (open toes sandals in the cold weather!). They seemed to slouch and drag their feet as they walked. They all appear very laid back as oppose to the up-tight Italians.

I finished my ice cream just as the rest of the gang emerged from the payment counters. Everyone seemed to have bought something. We all hopped into the car and continued with our short tour. Somewhere near Maungawhau Domain, we spotted sheeps.

Having seen Malaysian sheep during our previous trip to rural Malaysia (note to self: snap a picture of Malaysian sheep), Ma Hen was excited to see white fluffy New Zealand sheep. Aunt was kind enough to let us out of the car and brave the grass land filled with sheep poop just to get closer look / photos. AD on the other hand, was excited to see a cow, saying that the cows here have thicker and denser fur.

We then drove to One Tree Hill. There used to be a lone tree standing on top of the hill. The hill (and the then alive tree) has some sort of significant meaning to a certain Maori tribe. The tree was vandalized and cut down by a bunch of hooligans some where in year 2000. To mark where the tree used to be, an obelisk stood in its place.

We returned home, got a little rest before going out again. We were having dinner at Aunt & Uncle’s friends’ place. We met three more Singaporean families there – a pair of newly weds, a family of five, and a family of four. Having never heard Gram talking in her thick native dialect, the Singaporeans wondered what language she uses when talking to me. I understood her just fine and had no problem in conversing with her using the same dialect.

We had a wonderful dinner with agreeable company. We went home and to bed almost immediately. 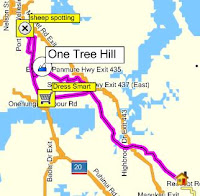 Distance traveled: approx. 47km
(p.s.: Location for dinner is not disclosed and covered in map)
Posted by Me at 10:55 am