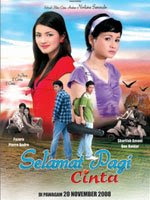 No, no one said that to me, though I wish some one did. It's the title of a local film currently aired in local cinema. And since it is still in cinema, I will not write long reviews.

Similar to Gubra, this film suffers a "Sembilu Kasih" syndrome. I much rather have the subplot about Julia (Fazura) and Ilham (Pierre), be properly evolved and explored. I feel that Suci (Armani) and Azam (Que) were distractions in the film. However, I had to agree with a fellow cinema-goer (who made loud comments from the seats behind), that Suci character was cute.

Cinematography wise, I like the camera angles. And all the important things are properly 'in-focus', a great improvement from "I'm not single". Script wise, spot a certain person's favourite cue-word!