Last and first micro adventure for the year - Part 2

First stop was the clock tower of Bangunan Sultan Abdul Samad. Previous evening I cycled along the road behind the building to avoid the polices and the city hall personnels. That day I took the opportunity to cycle in front of that famous KL landmark. 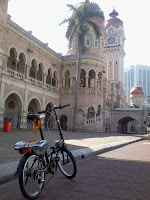 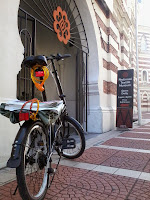 Thankfully the security guard let me parked Black Beauty at the entrance next to his table. There was no where else to put the bicycle. On top of that, I forgot to bring my keys, thus, even if I wanted to, I could not chain lock the bicycle. 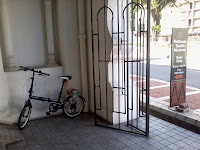 There were only four exhibition halls, two on the ground floor and another two on the first floor. The first hall have diorama of the textile making process such as batik printing and cloth weaving. The second and the third hall have the usual and the not so usual types of textiles. The last hall exhibits various acessories such as earings, neclaces and what nots.  Though small and limited, the museum have a decent display of various types of textiles. They have the clothes worn by the indegenious people of Malaysia as well as the usual "kain sarong batik". 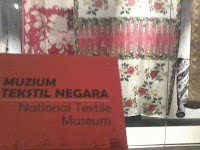 It didn't take me long to complete the tour of the museum. I was glad to find Black Beauty still where I had left it. I continued pedalling. at 11.30am I reached the old Kuala Lumpur railway station. 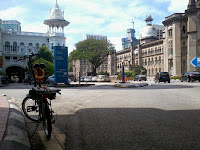 The station's lobby was fairly deserted. I practically pushed my complete bicycle up to the first plaftorm. I looked around for the lift. I asked a shop keeper from a window at the platform. She pointed me to one direction. Sure enough, there it was. I folded Black Beauty in front of the lift. By 11.45am, I was at the platform, waiting for my train. 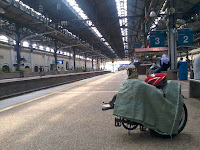 The train came around 12pm. I had no problem pushing Black Beauty into the coach. I took a spot that has the wheelchair sticker on the wall. I decided to sit on Balck Beauty's rear rack. That saved me from having to make sure Black Beauty didn't fall on its side.

An hour and 15 minutes later, I reached Seremban Railway station. It was time for lunch. I scouted around for an eating place. I didn't feel like eating any fast food. Finally I settled for a restaurant that has been in Seremban for as long as I could remember - Restoran Negeri.

I ordered 'murtabak ayam' and my favourite isotonic drink - 100plus. The chef took about 30 minutes to prepare my order, but the wait was worth it. The 'murtabak' was as tasty as it was eons ago. There were enough chicken strips, egg, onions and spices in the 'murtabak'. It was not too spicy nor salty. Everything was perfectly balanced. 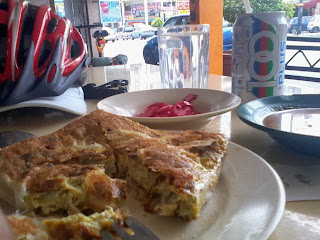 I took my own sweet time to enjoy every bite. My tranquility and serenity was interrupted by two older men when they took the empty seats at my table. I made haste and left for work. With that my first micro-adventure of the year came to an end.
Posted by Me at 5:52 pm

As for the station you mention above, is it the Central Station?

It is the original/old Kuala Lumpur Railway Station.